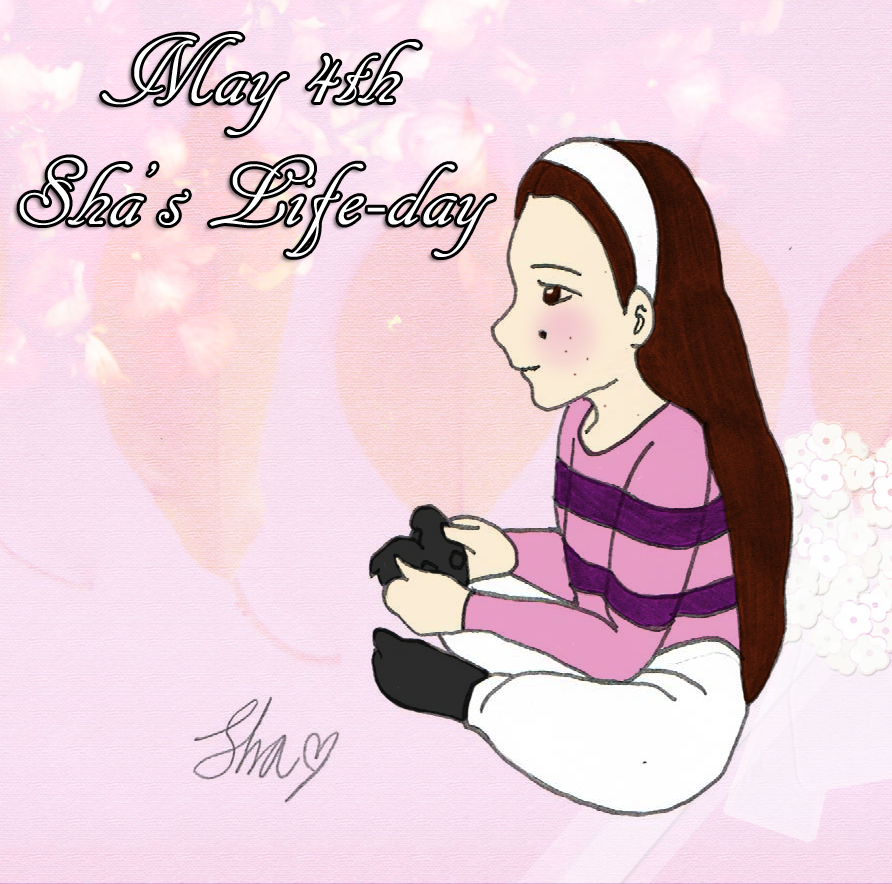 Today me and my personal character, Sha Amaranth, celebrate our life-day. 😊💜

Although I actually celebrated it yesterday with my Bros, the real life Micky and Robert, since they both had the day off. Micky went out early to buy some chips and soda for the party, when he got home just as me and Robert were preparing to go on a walk, so he joined us. The guys did a funny dance at the dinosaur area right outside the museum which I filmed on my phone. 😊💜

Then later we played Resident Evil 6 together, and ordered pizza, while Micky baked the cake – we had a lemon cake with strawberry frosting; ’twas delicious! 😊💜 And we finished the night off by watching the first few episodes of the new season of Castlevania, a throwback to how Micky’s birthday was spent last year which we spent marathoning S2 of Castlevania which had just come out at the time. We still have 6-7 episodes or so in S3 left, so we will save them for another time. 🦇

Today I saw my Bros before they went to work. Me and Micky had some cake for breakfast, and he shared with me his jelly donut roll protein bar which was big and delicious! 😊💜 I’ve been playing Spelunky today – trying to work up the courage to continue my game in Resident Evil Remake as my man, Chris. What’s funny is that when I used to RP as Chris years ago, I’d always put his birthday down as May 4th, so we share a birthday, tehe. 😊💜

Then I took a walk followed by shower to relax and changed into my favourite pair of ocean camouflage panties, with my Sailor Moon tank top over a lilac blouse. 😊💜 I asked Micky over text if he could bring me home soda and ice cream from work, he said he’ll see what he can do. Oh! And I received presents from friends and family too, including an Amazon gift card from Micky’s girlfriend which I used to buy the Resident Evil 3D movie set which has Degeneration, Damnation and Vendetta on it, so we can rewatch them all again!

We actually saw Vendetta in theatres in June 2017 when it was an one-day only event. 😊💜

As for the artwork, this sketch is originally from Inktober and is me/my personal character playing video games.

I roleplay as both Amy-Belle Florel the little vampyress, and her belle-mere (stepmum), Sha Pris Amaranth who is descended from faeries (aka me as a cartoon character), in PaperDemon's Art Role Playing Game, where I am also a Community Moderator, and New Player Rep.

Fun fact: The PDARPG item Elemensha, which is an elemental crystal, was named after me (Sha is my family nickname).

Love of my Life