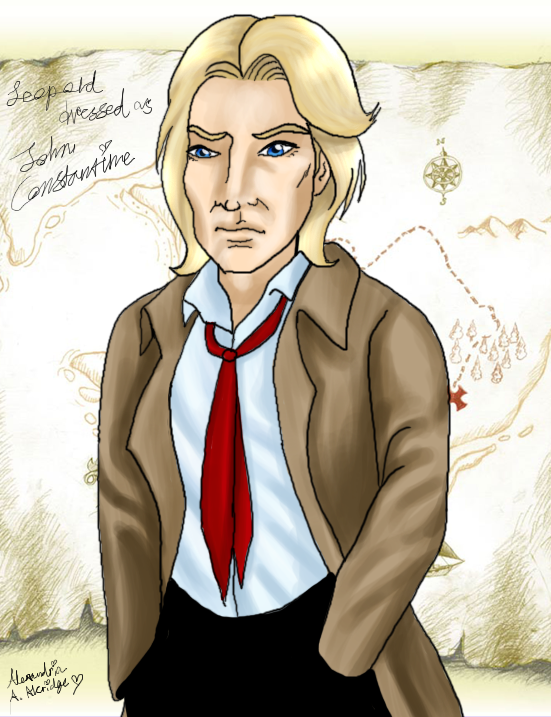 This is simply for PaperDemon’s OC-tober prompt: “In a halloween costume”, and cos our OC Leopold and John Constantine are both visually inspired by Sting aside from having some similarities, like they both are skilled in dark magic hence the title, and married to women much younger than themselves.

I drew most of this today while hanging out with Miriam-chan; we get together every Monday to draw and hangout.

I wanted to keep it simple, but added more shadows after Micky’s input that Leopold’s shoulders were small – although he did point out that Leopold is effeminine, and I was using a photo of Matt Ryan, who plays Constantine on TV {and who is a bit small himself tbh} for reference, and his shoulders *were* slouched, so… *shrug*

Now I’m thinking his head and features are a bit big, but oh well. . . this was a quick drawing – most of it is cropped out if I’m honest, since it didn’t look good, heh.

I roleplay as both my fictional stepdaughter, Amy Belle Florel the little vampyress, and her belle-mere (stepmum), Sha Pris Amaranth who is descended from faeries (aka me as a cartoon character), in PaperDemon's Art Role Playing Game, where I am also a Community Moderator, New Player Rep and Social Media Coordinator.

OMG!! I have the BEST Big Sisters EVER!! 🥰
Pls do! I'm curious. 🥲
Misty Blue. 🌊
Me with my artwork. 🎨
Finally got my hair to take colour! 🥰
This is me/my SI, Sha Pris Amaranth, formerly known as “Sha Aria-Ann Agate” as you can see on my notes I wrote when I was 18 and first drew this sketch of my SI with her pet bird, Falco, named after the StarFox character, and also inspired by a male friend I had at the time. I woulda erased the notes, but none of them are canon anymore anyway, so it doesn’t really matter, and is fun to see the differences there were! Sha still adopts Grace, and still receives Falco as a gift from The Howard. We will probably rename Falco by the time we get around to publishing our webcomics, though. This is just a prototype, hehe. So, yeah, I did this sketch when I was 18, and Rob was saying to me, “Did you imagine you’d be colouring your hair blue all these years later?” since the blue hair/wash out dyes are a recent addition to my SI, heh! I want to thank my dear friend, Miriam-chan, for hanging out with me on my livestreams when I worked on this yesterday and today. I decided to colour this old sketch of my SI with her pet bird cos of the Biweekly Art Challenge on PaperDemon’s prompt being your OC with their pet . . . I’m a day late though, but oh well – I did get the item to re-visit an old Biweekly Art Challenge from the PD Birthday Sale anyway, so I can use that to get points for the PaperDemon Art RPG! =^.^=

Sha for the PaperDemon Art RPG